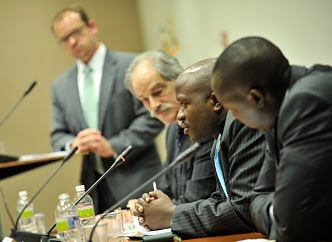 Congratulations to Liberia for a major milestone: $5 billion debt relief.

"This week, Liberians celebrated in the streets – faces painted, drums blaring, and dancing with abandon. They’re not rejoicing over some recent triumph by the Liberian soccer team or a local festival. The streets of Monrovia were overflowing because of debt relief. That’s right, debt relief. On Tuesday, Liberia secured nearly $5 billion in irrevocable debt relief from the World Bank, IMF, African Development Bank, and bilateral creditors. It’s a massive sum – the equivalent of roughly $1200 for every man, woman, and child in Liberia. As President Ellen Johnson Sirleaf stated, “today, ladies and gentlemen, is a day for us, as Liberians, to celebrate.” And celebrate they did. And so should we."

I took Ben's advice already and joined the celebrations at the CGD event last Tuesday. It was great to see so many familiar faces from my Liberia chapter there: Planning Minister (and my former classmate) Amarah Konneh, Steve Radelet, Conor Hartman, and several Ed Scott fellows, to name a few. (Dan Honig, you were with us in spirit!)

Hats off to all who were part of this huge accomplishment.
Posted by Molly Kinder at 11:12 AM 123 comments: